This is the question I'm most asked. How's it going?  How's Billy doing in his new place? The day I took Billy to Lexington Place on January 24th, I never dreamed that he would be doing so well in less than a month. The day that Shelley and I took him there and tried to explain the decision to him was horribly painful.  The pain was not quite as intense but comparable to the loss of our son in 2007. The pain was physical, and my heart hurt. Shelley and I cried and cried.


My friend, Karen, who had to place her husband in assisted living over a year ago, had warned me that it would be awful. She also assured me that it would get easier. I wanted to believe that, but it just kept hurting. I would start questioning my decision, and then I would remember the challenges of caring for Billy and the very real lack of funds to continue paying (and owing) for daycare. The first evening we were leaving Billy, the director of nursing spent a while talking with us. She told me this would be more painful for Shelley and me than it was for Billy because he would forget. She was right about that.


For the first time in a few years, Billy is calm nearly all day. Alzheimer's causes great anxiety and agitation for its victims. They pace, wring their hands, perspire, and worry in general. Sometimes they snap at others just because.  The good thing about Billy being at the new place is that he is observed by medical staff all day. He sees the doctor's PA every Monday, and he sees the psychologist's PA every Tuesday. They can adjust his meds as they see the need where before he lived there, he saw the doctor every 2-3 months. I could call the doctor, and her nurse would relay messages, then we would play phone tag for a while until we touched base again. Now, the PA can see him on Tuesday and start his new dose or new meds by the next dose.


He eats his meals at the same time every day. He has activities that he can do. He's become the "helper" because he's not as advanced in his disease as most of the residents in that area. He helps put away trays, moves chairs, and visits with the residents. During meal time the staff puts music on instead of the television. So many AD patients have issues with eating, and they don't need the distraction of the television. One evening they were playing old time country and western, and Billy shared with the staff that Ernest Tubb was his second cousin, or as Billy says, his first cousin once removed. Billy's dad, Tommy Knowles, was Ernest Tubb's first cousin, and back in the 50s and early 60s when Ernest would come to Fort Worth to perform, he and Tommy would go out honky tonking.  Needless to say, Billy's mom was less than fond of old Ernest, but that's another story altogether! The staff got a kick out of Billy talking about cousin Ernest. I love that so many of the residents who hardly remember their own names can sing along with these old songs. Walking Betty rarely talks, but she smiles and sways to the music. Smoking Betty sings along.


I go visit Billy every evening with very few exceptions.  Sometimes I have other obligations like school board, PTA, etc. Once a month, I go to dinner with Karen, and when I don't make it to Lexington, Shelley goes to visit.  She goes most evenings, too, but sometimes it's too much with her schedule. If we get there by 5:00, we take Billy to the main dining room, and he seems to enjoy that. Many evenings he's the only male resident who eats in there, and the little ladies love him because he smiles and greets them as though he's known them forever. I'm stopped frequently by staff members who tell me what a sweetheart Billy is. They are right, you know. Billy is one of the best people I know. He has a big heart, and he loves openly. I know the time may come when he has a glazed look in his eyes as so many of the AD residents have.  They don't seem to recognize anyone and struggle to communicate. That is hard for their loved ones, but they just keep on talking and loving on them remembering how they were.


I can truly say that it's getting easier...I don't know if I can say it's better, but it is easier. There are times when I have moments of envy. I wish I could travel with my husband...we had great times when we took trips. I wish we could have a date night where he surprises me with dinner and a movie. I still remember the last time he brought me flowers, and I loved it.  He really couldn't remember why he had bought them for me...but it didn't matter; it was a beautiful surprise. I get over those moments pretty quickly when I think about the blessings we've had and still have. Billy still recognizes me, and he is always quick to tell me how much he loves me. He can still hold my hand and give me a hug and a kiss. The rate of his decline is less than some. Some with Early Onset decline so rapidly that they pass away in five years. Billy is pretty healthy other than this insidious disease. I've mentioned Karen several times in my posts, and her husband was put on Hospice about a month ago, and he's not expected to live for more than about six months. I'm thankful I'm not facing that at this time.


Peace and love to all. 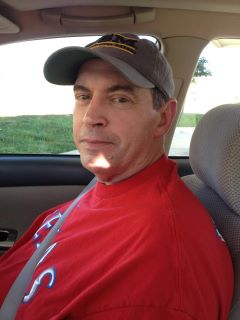 I took Billy to Sonic for a hot fudge sundae this afternoon! We enjoyed a lovely Sunday afternoon.

Posted by Kathy Knowles at 8:15 PM