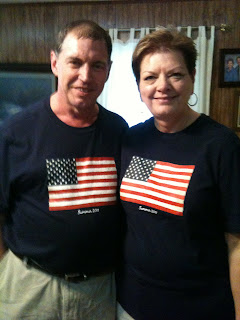 Billy and I both come from loving families, but they are different. My family gets together as often as we can - birthdays, holidays, and just because days. Billy's family gets together once a year - Christmas Eve. They are close knit within their immediate families, but the extended group - not so much. Billy's 55th birthday is July 12th, and because his decline has been so rapid lately, Shelley and I really want this to be a special birthday for him. We are having a party for him this Friday night, and I called his older sister to let her know. Unfortunately she will be out of town, but she invited us to her daughter's house this past Saturday for a pool party where her three children and all of her grandchildren would be together. So, off we went to buy Billy a swimsuit and sunscreen for Saturday. It was great to see him enjoy his family so much. I doubted he would swim because I chose not to, but I sat outside with him, and he actually got into the pool. He was not anxious to leave, and in fact, I was the one to say we needed to go in time to get to church on time.

After church on Saturday evening, we had dinner with family and friends, and Billy was relaxed and talkative. He did get very nervous when I told him we were meeting my sister and her family and some friends at my school to watch fireworks from the roof of the building. We've done this for the last 5 years, and he's always enjoyed it, but this year, the anxiety got to him. He did calm down some after we all got up to the roof, but he was really relieved when it was all over.

On Sunday, we enjoyed a relaxed morning, went grocery shopping, and had lunch with Shelley and Andrew at our house. Afterward, Andrew agreed to hang out with Billy while Shelley and I ran some errands for a few hours. Billy really enjoys Andrew and feels comfortable with him, and Andrew is an awesome young man who is very patient with him. According to Andrew he didn't seem real anxious but he did talk a lot about us playing soft ball on Sunday night. Who knows where that came from...I can guarantee I had NO plans to pay softball that night or any other nights in the future. But by the time I got home, and we talked a little, he made no mention of it. We ate and went to my sister's house to visit, and he really enjoyed himself. Another really great day for Billy!

Today we celebrated July 4th with my parents who live about 75 miles away. We had hotdogs and Mom's homemade peach cobbler. Billy couldn't compliment the cook enough! He kept us all wondering what he might say next, and I'm sure I was the most nervous. I would describe his actions as silly when he's in a good mood. At one point, my dad and I were talking about a cruise he and Mom had taken, when Billy interrupted, and looked at my dad to say, "Let me ask you something." I held my breath for a moment because he's said that to me a few times lately, and then he says something like....Can I sleep with you tonight? I couldn't imagine what he was about to ask my dad. Then he said, "If we were to invite you, would you come spend the weekend with us?" I was really relieved and amused at the same time. My dad knew we had given Shelley and Andrew our guest room bed, and he told Billy, we didn't have a place for them to sleep. Without a moment's hesitation, Billy said, "I'll be sleeping on the floor." His intent was really sweet. He loves my parents, and he wants them to visit, and that was on his mind. He'll be thrilled when they come for his birthday party on Friday evening and actually spend the night because I got a bed for them. :)

Billy seems to be at a stage in the disease where his emotional maturity is much like an adolescent boy. He gets very silly and says things that he thinks are humorous and laughs easily. Many of the things he says do not make sense. The words are real words, but I don't know what he's talking about. As Shelley says, his filter is either turned off or missing. It's hard to be around him and not laugh with him. It's infectious, but we aren't sure what we're laughing about. He's also very quick to express his feelings, and as we left my parents' house today, he gave my dad a hug and said, "I love you." Even though I have a close knit, loving family, my parents have not always said those words readily. I've never questioned that I was loved, but we didn't make a practice of saying it out loud. Billy's family has always been very open about saying they love each other, and Billy has always said that to his family members, but recently he says it to his caretakers, and today to my dad. My dad's response to him was, "The feeling is mutual." And I believe it is...

Posted by Kathy Knowles at 9:42 PM