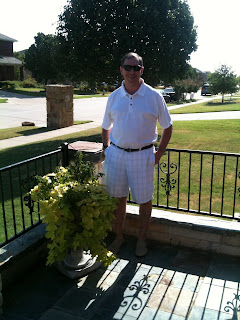 Taking Billy to a new daycare on Friday morning was tough. I didn't remind him until that morning that he was going, and he handled it better than I anticipated. He told me he would go "just this once," and he proceeded to ask me the following...
1) Are there a lot of old people there? Yes, but you're around older people every day. But is everyone elderly? No, there are some younger people there also.
2) What time will you come to get me? 4:30 What time do they close? They don't really close because some people live there, but I will pick you up by 4:30. (This question was asked approximately 47 times in a one hour period.)
When we arrived, the nurse spent some time with us asking some questions about routines and what Billy can and cannot do. At one point, she looked at Billy and said, "And you taught school?" to which he replied, "I still do." She asked where all he had taught school, and I was trying not to answer every question. He searched for the answer and finally came up with Burleson. That is where he went to high school and graduated, but he has never taught there. No big deal, though.
It took me 7 minutes to go from our driveway to the new daycare - Autumn Leaves. What a joy! My gas gauge did not move a quarter of a tank from the drive, either. When I arrived to pick him up, he was not in the common living area, and in a minute or two, he came into the room with the director and another employee. The director told me she had put him to work, and that he had been looking for me since 3:00. That is pretty much the norm for Billy.
On Friday evening, I received a phone call from the caretaker who meets me each morning and takes Billy on to the Cottage. She wanted to know how he had done at the new daycare, and I relayed that to her. She went on to tell me about an outburst Billy had on Wednesday. She had mentioned on Thursday morning that Wednesday had been a really rough day for him. He had called me twice from her phone, but he answered each time and asked when I was coming. No one else got on the phone to talk to me, and when I picked him up on Wednesday, nothing was said. It's difficult to discuss things with the caretakers when I pick him up because he's by my side from the moment I get there. I try to get him to go the restroom, but he never needs to.
Apparently on Wednesday, he became very angry about still being there, and he wanted to go home. He paced as usual, and when he got really angry, he pushed a chair and cursed. They know this is totally out of the norm for Billy. He never curses, and he rarely gets angry. That day, he told them he was just going to leave and walk home. Even though I don't believe he'll really do this, the Cottage is not secure, and he is able to walk out. The new daycare is a secure facility and specializes in memory care.
I'm sad that Billy had such an outburst. He is such a pleasant person, and even though he is different in so many ways and he gets agitated, he rarely gets angry. A new behavior to deal with, I guess. When his mom was in a nursing home, she had to be moved to an Alzheimer's facility because she was becoming so aggressive and punching people. This was so out of the norm for her. Chalk it up to one more stinking issue that arises with this disease. I hate Alzheimer's Disease.
I am very hopeful that the new place will work out eventually. I believe we are on the right track, and I appreciate your prayers about the appropriate place for Billy.
The picture above was taken on Saturday when Billy looked great and seemed to be very happy.
Posted by Kathy Knowles at 9:05 PM