What a wonderful day we had on Saturday! The annual Memory Walk took place at Trinity Park in Fort Worth, and Team BK was present with 27 proud walkers. Shelley did a fabulous job of organizing and getting the word out. I think I mentioned that we walked two years ago and had four in our group and raised $25. Now we know more about what to do in preparation, and we will only go up from here. Of the walkers, our son-in-law's entire immediate family walked with us. Shelley is blessed with her second family, and we are blessed to know them. My aunt who is 71 and was recently diagnosed with Parkinson's walked with us and never missed a beat. My sister and brother-in-law walked and pulled their little ones in a wagon. I could go on and on, but I'll just say...Thank You to all! 27 walkers and close to $1400 this year. Praise God!

I'm posting some pictures of the event. Our son-in-law, Andrew, designed the t-shirt, my dear friend, Deb Cano and her husband Larry, owners of Cano Electric sponsored our group and purchased the t-shirts, and many of you gave and gave and gave! We are honored and humbled by so many. I was amazed at how much the walk has grown in two years - many more people walked, and many more people are affected by this disease.

Those of you who know me well know that I am not known as a person prone to giddiness, but I am very close to being giddy! On Thursday, I will fly to Midland and meet two of my very dear friends, Kathy and Rhonda, and we will leave for the mountains of New Mexico on Friday for a relaxing girls' weekend. I have not been away from Billy since 2008, and I'm nervous about being away now. However, I need some time away for his sake and mine. Shelley will be with her dad one night, and then he'll spend the weekend with his sister, Cindy. She is looking forward to having him, and he will enjoy the time with her.

We still have concerns about my mom who has had many tests and must have some more. After several tests, she has been cleared of cancer of the breast, colon, ovaries, uterus, and lungs. The PET scan did show another tumor in her abdomen, and the search continues. Please keep her in your prayers. She had two days of testing last week, and then on Friday, my dad had an epidural steroid injection in his hip. We hope and pray that his pain is lessened soon.

Thank you for you unwavering support of our family. Your prayers are felt and appreciated. 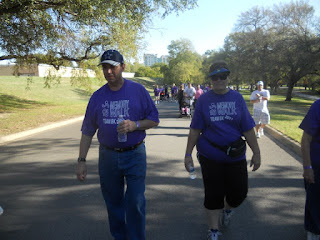 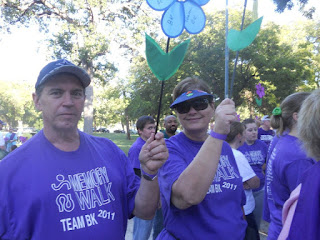 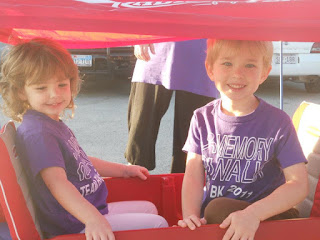 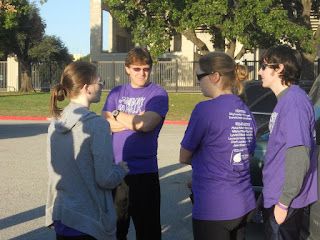 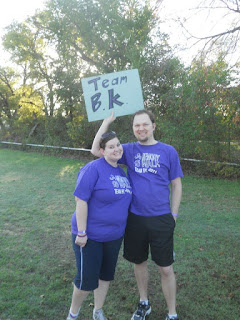 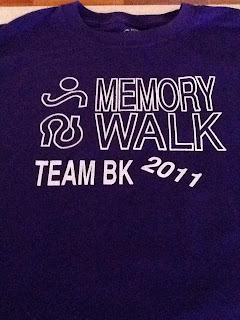 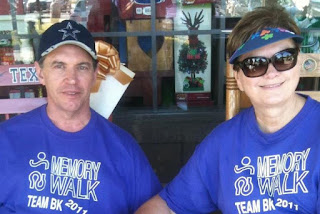 Life seems to be one big balancing act at times. I'm often off balance in one way or another, but I'm always blessed by those around me. So many blessings have been revealed to me recently, and I love to share those.

An illness like Early-onset AD is devastating in so many ways, and one of those is financial stress. AD is an illness that requires medical treatment and constant change in the family's way of life. Medical bills are kept at bay to some degree with insurance, but the cost of that insurance is very expensive. In addition to the doctors' visits and medication, the constant care of an AD patient is costly. Unless a family member is available and capable of caring for an AD patient, someone must be paid to care for that person. Adult daycares are not created equally....some are better than others, and the place where Billy stays is the best I've seen. The best is expensive, and I recently had to face the fact that I can't afford the Cottage. I investigated other places and found a place where I could feel comfortable with Billy even though it didn't compare to the Cottage. When I let the folks at the Cottage know about Billy leaving, the owner was there to meet me when I picked him up. She told me the staff at the Cottage is not ready for Billy to go, and she encouraged me to keep Billy there and not to worry about the payment for now. I told her that I already owe her a lot of money, and she told me again that she really did not want me to worry about it.  She also assured me that they are able to care for him, and when they cannot, she will let me know.  Because of the change in transportation, I felt that is challenge enough for now, and he remains at the cottage.

The bus has been another blessing by freeing up much of my time in the afternoons.  I'm able to run errands, stay late at work, or go home and walk on the treadmill.  It's wonderful to have choices.  The first day Billy rode the bus by himself was both amusing and heartbreaking.  He was nervous about getting on and needed help getting his seat belt buckled.  He made sure I was still in the drive way and waved at me in such a cute way.  It broke my heart to see him so child-like.  Throughout our marriage, Billy has taken on the role of protector and has always assured me that I'm safe with him.  Now, I am his protector, and he clings to me because I'm his security.

We've been blessed in many ways by being a part of a small group in our church.  We meet in a home with about 6 other couples and a few single folks now and then.  The women in our small group have decided it would be helpful to provide us with a meal (that usually turns into 3 or more meals) each week.  They bring this on Sunday evening, and on Monday, I have no concern about dinner that night.  It's such a freeing feeling to know that I can just heat something up when we get home from a long Monday.  I don't have to plan it, buy ingredients for it, or prepare it.  I think if I lived by myself, I could easily eat a bowl of cereal for dinner several nights a week, but Billy wouldn't go for it.

The challenges continue to mount, and I never forget that God is greater than all of my issues.  Foremost on my heart right now is the health of both my parents.  Because my parents were young when they started their family (20 and 22), and I'm the oldest child, I've always had young parents compared to my peers, and they've seemed youthful.  The last year has been a rough one on my dad's health following back surgery in August of 2010 when he had a very negative reaction to pain meds.  His back is possibly worse than it was, and he is having memory issues that alarm us.  I mentioned my mom in my last post regarding a mass in her abdomen, and the biopsy came back as metastatic poorly-differentiated non-small cell carcinoma....a mouthful for cancer that started somewhere else.  Now, the search is on for where the cancer originated, so that a treatment protocol can be developed.  My sister, sister-in-law, and I all feel a strong desire and need to help out as much as possible, and that offers other challenges.  Although we've tried to convince them to sell their home in Corsicana (90 miles away) and move closer, my dad has been more than resistant.  We are not comfortable with him driving them to and from out of town appointments, and we are working on that also.  Please continue to pray for my mom, Alyce,.... that the doctor's find where the cancer started, and we can get on with getting rid of the cancer.  We also need prayers for how to work with my dad.


Add to that the fact that Billy's cognitive skills continue to decline, and we have more stress.  His ability to communicate is greatly affected, and even though he talks, often what he says does not make sense.  He has delusional episodes where he tells me he has to get home (while we are home), and he asks me if I'm driving his mom's car.  This past weekend, he kept asking me if I wanted to go to his house in Burleson and watch the ballgame. That is where Billy grew up, and the house has been gone for over 25 years.  He also asked me this past weekend if I had heard from his mom, and most mornings he asks me if she has already left.  I usually just tell him that she's not at our house.  He told me several times that I am a great sister, and he's glad that I'm his sister.  Sometimes, I feel like I live in the Twilight Zone.  One evening, we were driving along in our car, and he asked if we had left the car in the parking lot.  We were less than one block from Walgreens where I had picked up prescriptions, and he asked if I knew where to go to pick up prescriptions.  Five minutes later, in the midst of golden silence, he says, "Do you know where to go to get that?"  "Get what?" "The tire."  I don't always have a response, and I really work hard at not sounding incredulous all the time, but our converstions are just strange most of the time.  However, I am very thankful we still have conversations, and even though he thinks I'm his sister at times, he knows I'm somone who loves him and cares for him.  I know these are precious gifts...when language goes, communication is much tougher.

Posted by Kathy Knowles at 9:19 AM 3 comments