I should be getting my beauty sleep at this moment...or at least my survival sleep. But I find it necessary to write. Writing is therapy for me, and at this time in my life, it's less expensive than seeing the counselor!

During the last few years of my life, stress has become routine, and while I don't know that I thrive on it, I seem to hold up well under the pressure. The last 6 weeks have almost done me in...and I'm not alone. Our entire family has been a bit stressed. In addition to the "usual" stress of a spouse with Alzheimer's, we've had an additional stress with the health of our parents. My sister, Leslie, and I were thrilled to move them into an assisted living apartment back in November. Mom has been battling cancer for about 18 months, and Dad has Lewybody Disease. His needs were becoming difficult for Mom to handle, and the responsibility of everything for Mom was really rough. Chemo is tough and with each phase of it, it seems to become even rougher. It also was not curing the cancer or even keeping it at bay, so after much concern and thorough research, it was determined that the best thing to do was remove the tumor surgically. We knew it was a complicated surgery with a lengthy recovery, but no one knew how complicated it would be, nor how many complications Mom would face. She withstood a 10 hour surgery on January 16th, stayed in the hospital for two weeks, and has been in a rehab hospital since then. She may get to go home this weekend!  We are hopeful.

Back to the stress part. Mom's surgery was in Dallas about an hour from where we all live. Our routine during her hospital stay was work all day, pick up Dad from their apartment where a caregiver had stayed with him during the day, and drive to Methodist Hospital in Dallas. Visit Mom for a few hours, take Dad back and spend the night with him. We are not comfortable leaving him alone, and he's not comfortable being alone. He still doesn't think of the apartment as home. Sometimes when we drive up, he says he hopes they have a vacancy for the night, or he asks if this is where he will live for the night.  The next day, whoever stays with Dad gets up, and starts the entire process again. After two weeks, Mom was able to move to a rehab facility that is blocks away from their apartment.  My stress lessened a bit because I no longer drove to Dallas several times per week. Mom has had numerous infections and a few setbacks, but we see great progress.

Now my routine is to work until about 4:00. Go pick up Dad from the apartment, take him to the rehab to see Mom. I leave him there and drive to the nursing home to feed Billy dinner, leave when he's eaten, go get fastfood for Dad and me, then return to the rehab place. On top of this, work has been crazy. I could write a few hundred pages about it, but I'll spare you all! My great comfort during high stress is FOOD! I'm not ready to face the music (or the groan) of the scales, but I know my clothes are feeling a bit stretched.

I have missed being able to see Billy each day. I know he will be fed, but I also know how short staffed they are, and I like feeding Billy. It's odd how he has to be fed because he has no trouble chewing and no noticeable choking, but if we don't feed him, he just sits there and might take a few bites but he ignores his food. It's difficult for him to get the food on his utensil and get it to his mouth.

He had a pretty long streak of being fairly happy, alert, and compliant. That stopped a few weeks ago. The evening nurse from weekdays called to tell me that he was walking very differently and nearly falling. He was agitated and combative. The nurse wanted to speak with the psych nurse and see what could be done. I had also noticed his walking was even slower than before and not completely steady, but I didn't worry much about him falling and attributed it to the progression of AD.  The medical staff determined they would try to switch out the Ativan he was taking and give him Xanax. At first, it seemed to help a bit. A few days after he had been taking the Xanax, he used more complete sentences than he had been, and his wit was back. I went to pick him up on a Saturday afternoon, and as we were leaving one of the nurses told him she had not given permission for him to leave. She teases him often. He looked at her, and without missing a beat, he said, "We can go anywhere we want to go." I could even see the twinkle in his eyes.

By the next Saturday, he had changed drastically. I got a call from the weekend nurse telling me that he was bent forward while walking, and they were very concerned about him falling. He refused assitance and tried to hit a few people. He also refused his meds and would NOT take them. The nurse asked if I would come early and see if I could help settle him. With the traffic in our area, it takes me at least 30 minutes to get to him, and when I walked in, I did not see him walking the hallway. I walked by his room and could see his feet on the bed. When I went in to see him, he was sleeping hard. In over a year, I've only see him on the bed 3 or 4 times. He does not nap, but they had calmed him enough to get some meds down him, and I decided he needed to sleep more than he needed to go with me. I received another call yesterday from the evening nurse, and it was almost the same call I got the previous Saturday....walking and pacing unsteadily and very combative. He had to take meds in order to eat. Today, I went to feed him, and he was calm and glazed. I hate glazed. I feel sure it's a mixture of the disease and the meds.

I usually hold it all together pretty well. Tonight was not one of those times. The tears were about to roll, so I told Billy it was time for me to go. He did walk down the hall with me after a bit of coaxing, and he offered a smile as I left. But I still went the restroom to cry.

This photo was taken on Valentine's Day just 13 days ago.  His eyes were brighter, and his smile was wonderful. 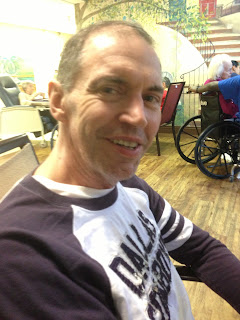 The video was taken this evening. He's not with me.
My hope and prayer is that tomorrow I will see Billy, and Billy will see me. I am so thankful I get to see this man any day, and I'm double thankful when he sees me. I hate this disease.
Posted by Kathy Knowles at 9:42 PM 2 comments