I've been in the center of a giant whirlwind over the last several weeks...maybe months, but in particular the last few weeks have left me spent - physically, mentally, and emotionally.

School has offered a number of challenges - even more than usual. I have a theory that when you put over 1,000 fifth and sixth graders in a building, and each of them has one parent but many have multiple step parents, fathers of the week, and grandparents, issues will arise. Add to that 100 teachers and support staff, and you might have a few more issues. This year is number 32 for me in public education, and some might think I should have it down by now - this administration stuff. However, I can assure you that there is no prep course or primer for some of the things that arise, but as Hooper often says, I digress.

My mom is finally out of the hospital and rehab, and now we have appointment after appointment to follow up with three surgeons, one cardiologist, and the primary care physician. My sister and I try to split the doctors' visits, but it is so difficult for her to get away from work and drive the hour commute back to my parents. I do love the time I have with my parents. I do hate the drive between Fort Worth and Dallas.

In the midst of Mom's medical issues, when we were exhausted beyond what we thought was possible, my sister mentioned that we should get away over Spring Break.  She and her family had rented a house on the beach in Galveston a few years ago, and we put our shekels together to go for four wonderful days back to the beach! It was the best thing I've done for my mental state in a long time. I spent hours on the balcony reading and napping. On Wednesday, we returned to the real world of all the things we want to do during Spring Break.  One of my aspirations was to clean out my very large closet that I could scarcely step into. It was clean and organized last August, then life got crazier, Shelley and Andrew moved in, and I put more and more stuff in my closet. I started on Friday night. I'm still working on it.

I also felt the urge to clean out the bedside table drawers that had always been on Billy's side of the bed. The inventory in those two drawers include the list below; it is not an exhaustive list....just some of the items.


Every item I pulled out of that drawer brought me a memory - very pleasant memories for the most part, and what a blessing that was and is. Billy always had a "thing" about watches.  He hated to be without one, and he liked having more than one.  He treasured his granddad's pocket watch, and kept it close by. He also enjoyed pocket knives. According to him, a man should never be without one. He used his for everything from cutting away the bark of a pitiful looking tree to check for any life to slicing apples. The man loves apples, and as his dementia worsened, he would devour 4 to 6 apples a day and swear he'd only had one!

He's always enjoyed a wide range of musical genre, so it was no surprise to find the CDs and the rather useless cassette tape. I am surprised that a Bob Wills tape didn't show up, but I'm sure several will be found as I go through stuff. Billy (BJ) as so many know him, was in a Western Swing band in college.  They cleverly named it the Bob Wills Band, and they had some interesting gigs!  He LOVED singing with that band. No Grammys were awarded to the Bob Wills Band, but a bond was forged that remains 30+ years later. BWISTK!

I really enjoyed looking at the pictures he carried of his family. He carried all his favorites of the kids. As so many parents do, he had more pictures of child number one - Shelley! He's carried the same photos for years, and you can tell by the condition of them. 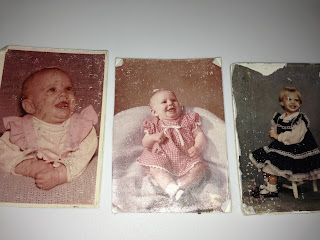 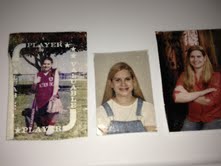 Shelley - from very young to teenage. 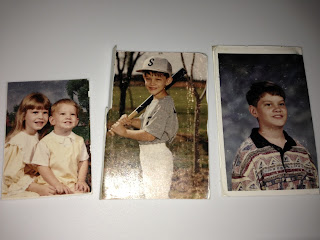 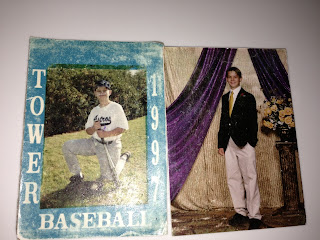 Andrew - most baby pictures made of Drew included his sister! Such a handsome young man he became.

He carried only one picture of me, and it was from the first summer after we began dating.  He went off to sell Bibles in the Carolinas, and we missed each other terribly. I had these pictures made for him (gotta dig the faux country background), and I certainly didn't know he would carry this around forever.  I was 19 and absolutely crazy about BJ Knowles.  It was a very long summer. 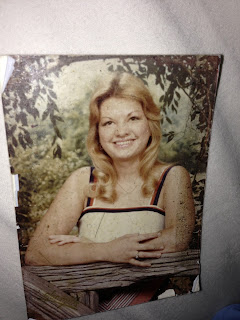 In 1976, I met and fell in love with Billy Jack Knowles. We were very young and even more immature. Five years later, we stood before family and friends and promised to love and cherish each other for the rest of our lives.  We had no idea what the future would hold, but I am positive that if I knew then what I know now, I would do it over again. I love and respect him more than ever as he became the best husband, father, son, uncle, and friend anyone would want.

"Take care of your memories for you cannot relive them. "  Bob Dylan

When I posted my last blog, I received many comments through Facebook, email, and this blog assuring me that prayers were going up for Billy and all of us who care for him.  I posted on February 27th, and God answered my prayers on February 28th. When I went to feed Billy the evening of the 28th, he was a different person. He was responsive and smiled easily, and he told me he loved me. What a huge blessing!


﻿
The next evening was even better. I spoke with the evening nurse who told me they increased his Seroquel and changed the Xanax to prn.  He always seems to "need" it more on the weekends. I'm not certain if his behavior is off on the weekends or if the expectations are different.
I was able to pick him yesterday afternoon and take him to our Saturday evening service at church.  It went well, and for the first time since the holidays, I took him home for a few hours for dinner and time with family.  He was in a great mood, and as soon as he walked in, he began petting his dog, Bailey, and said, "There she is!" I love this photo that my son-in-law, Andrew took.  He loves his dog!
﻿ 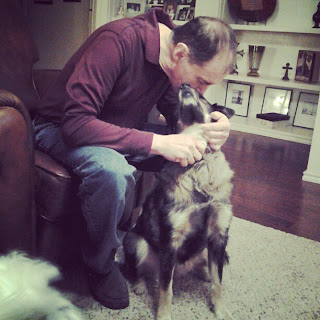 I never doubt that God hears our prayers and answers them, but I don't always get his answer so quickly.  Praise Jesus for interceding and putting my mind at ease. I am not naive about Alzheimer's Disease, and I know the future for Billy unless God provides a miracle, but oh how relieved I am that I am not facing a more declined mental state at this time. I am always so grateful for your prayers.
My stress level was relieved tremendously this weekend. Billy was happy, Mom went home from rehab and is doing beautifully, and I will sleep in my own bed for the week. ﻿
Posted by Kathy Knowles at 7:32 PM 0 comments