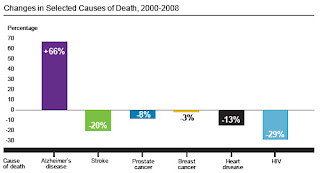 I was not born a natural analyzer of data, but I have learned to collect and analyze data, write action plans, and implement those plans. It's a big part of my job and has been since testing became a huge part of education in Texas. I know that data can be skewed and manipulated, and many organizations have been guilty of that from time to time. But I also know it's hard to deny some of the hard facts of data. The report I've linked at the bottom of this post is sobering when it comes to the data regarding Alzheimer's Disease.

The figures that should be surrounded by flashing lights are:
Alzheimer's is the sixth leading cause of death.
Of the top ten causes of death, Alzheimer's is the only one that cannot be prevented, cured, and probably not slowed (although some drugs claim to slow the effects of the disease).
The graph at the beginning of this post shows the drastic increase in deaths from AD, while the others listed have declined. Why the difference? Partly because of lack of funding for research. Without funding researchers are unable to spend enough time and money to determine what causes Alzheimer's Disease. We have a clear picture of what AD does to the brain - it makes it disappear piece by piece. It causes literal holes in the brain, and the plaques and tangles are formed instead of synapses being formed.
I witness my mother-in-law go from a strong vibrant woman who raised three kids on her own to a frail little lady who couldn't speak, walk, make eye contact, hold a hand, dress or feed herself. She lived a long time with the disease because her body was strong. She passed away at 81, and although it was hard to say goodbye, it was a blessing that she could become whole again in Heaven.
Now I watch my husband go from a strong, intelligent man who cracked me up daily with his wit to a young boy in a man's body. He is often confused; he has delusional ideas and episodes; he struggles to follow the plot of a television show. He used to spend hours reading articles on the computer and taking quizzes for fun. I haven't seen him touch a computer in months because he doesn't remember how to start it or maneuver around it. He no longer works crossword puzzles. He still has a great vocabulary, but the words come sporadically, and he has more and more issue with finding his words. Some days he asks about him mom as though she still lives, and sometimes he remembers that she has passed. If he finds he doesn't want to do something (like go shopping with me), he starts complaining about a stomach ache. It seems to be an excuse to leave and go home, but maybe he really has a stomach ache. I don't know, but it often disappears when we get back home, and he relaxes. I am thankful that he can still relax somewhat. The doctor has increased his dosage of meds for anxiety, and we need to give it some time to work. I'm praying it works, and he can stay with it. Please pray for more funding for Alzheimer's research and for those who suffer from this disease.
Alzheimer's Association - Facts and Figures
Posted by Kathy Knowles at 7:04 PM