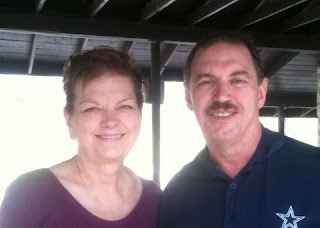 I must share something good....really much better than good....something I'm still struggling to comprehend. I met our good friends Jonathan and Debra for lunch last Monday, so they could share with me a "little" something they had worked on to show their support for Billy as he changes daily in the throes of Alzheimer's Disease. Some of you reading this may have been a part of their plan, and I am most grateful to you. It seems that Jonathan contacted several people who knew Billy from many years ago when we were in college, and they were able to contact many more people that Billy knew from college, and upon learning of Billy's disease, many of them who care about Billy sent donations to us.
To say that I was surprised by this gesture would be an understatement, and the generosity of these angels amazes me. I am humbled, grateful, and so honored that these gifts were given for Billy. I've shared through previous posts that we live with my sister and her family, so I can afford the daycare for Billy. These generous gifts allow me to get caught up on what I've owed for the daycare (the owners of the daycare have been so generous in allowing me to pay them slowly), catch up on some other bills, and have a little reserve in case of an emergency. Oh, and I can get my windshield replaced - something I've put off for over a year because it's another $200 I just couldn't pay. I pray for wisdom in the stewardship of these gifts.

I know why so many care about Billy - for the same reasons I love him. Billy was a funny, friendly, outgoing young man in college. He was active in band, club, and all things social. His grades could have been much better, but his first priority was to have a good time with his friends. His sense of humor and personality were what attracted me to him. He always had a sharp wit and could entertain an entire room of people. I really miss that Billy, but we sometimes get a glimpse of the old Billy when we least expect it. We were at church on Saturday night, and during the "hug and howdy" time, Billy turned around to meet the group behind us. One woman introduced herself as Carol from Indiana, and without missing a beat, Billy said, "That's okay. We'll talk real slow for you." That's the Billy Jack we've all known for years, and we rarely see him these days. He's always had a way of endearing people to him, and he still does. He is truly loved by everyone at his daycare.

Tomorrow Billy, Shelly, and I will take a short trip to visit good friends in Midland. Billy and Shelley have not been back to Midland since Andrew's memorial service in June of 2007. I have been back once to teach a staff development session in 2008. This trip will serve more than one purpose. Although the main reason we are going is to visit friends we've not seen in too long, I am also using this gauge how well Billy can travel. We made a short trip to Stephenville a few months ago, and Billy's anxiety was high the entire time. He worried that I was going the wrong way and wanted me to stop at every gas station along the way - just to ask for directions. I refused, and that caused him more consternation. He was so surprised when we pulled up in front of the Hooper's house. That trip was less than two hours, and Midland is at least five hours away, so prayers are requested. If we can make this trip without too much anxiety, I'm hoping to make a more memorable trip with Billy this coming summer. The most fun we ever had on a trip was a cruise we took four years ago. As quality life slips away from Billy, enjoying time together is a top priority.

Today was a good day for Billy, and he was less anxious than usual. The picture above is from today. My parents came in town, so we could all celebrate my mom's birthday together, and I anticpated that Billy might struggle more because of the lack of routine for him. We gathered everyone in three cars and caravaned to Forest Park in Fort Worth for a picnic. I lead the cravan, and I really didn't know where I was headed, but we found a wonderful place that wasn't crowded. Billy handled the drive pretty well, especially since he had no idea where we were going. We enjoyed a picnic, and then we all took a ride on the mini-train that has run through Forest Park for over 50 years. This was my mom's birthday wish - a picnic in the park where she had picnics as a child. We had a blast, and Billy really enjoyed himself. Shelley and I had a chance to talk about why he had a good day, and we finally decided it was because we were all together, and he felt secure. We'll take that anytime we can get it.
Posted by Kathy Knowles at 7:04 PM