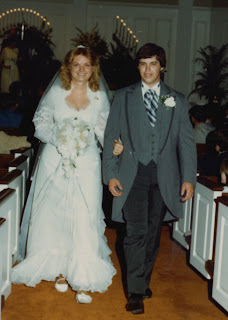 I married Billy in 1981 when I was 23, and he was almost 25. We had dated for five years during and after college, and we felt we were finally grown up enough to get married. :-) Looking back, I really doubt we were all that mature. As I recall the first year of marriage was full of fun (like going to matinee movies 2-3 times a week after we got off work) and full of arguments about many issues (like eating in the bedroom vs. NOT eating in the bedroom). Those were the days we discussed things like if we should buy a new car. Where would we spend Christmas Eve - his parents or mine? Those were the days before children obviously because after children, our discussions were centered around them, and our entertainment involved a trip to McDonald's for a Happy Meal.

When I reflect on the last 30 years, I can easily think of 30 things I love about Billy, and I want to share:

1. His unconditional love for his family.

2. His non-judgmental attitude toward others.

3. His smile and easy laugh.

4. His compassion for others, including animals.

5. His silly jokes like the following....I would run off and marry you tonight, but I'm eating canteloupe!

6. His loyalty to family and friends.

7. His loyalty to his teams...Dallas Cowboys and Texas Rangers.

8. His knowledge about all things Texas!

9. His undying love for his home state.

11. His natural ability to be the "fun parent" as my children declared frequently.

12. His good natured joking with others.

13. His ability to show affection to anyone without embarrassment.

15. His determination to complete his degrees.

18. His fearless fortitude to attempt to fix anything around the house.

19. His willingness to eat whatever I cooked with a smile on his face.

20. His reassurance when I made big mistakes.

23. His genuine care for his students.

24. His talent for landscaping.

25. His caretaking of his mother who died from Alzheimer's Disease.

26. His love and insistence on family traditions.

28. His spirit of volunteerism - going on mission trips and band trips with our kids.

29. His allowance for my independence.

30. His commitment to our marriage.

I realize that so many of these things have changed over the last few years with the presence of Alz. Disease, but I will never forget the reasons I married him and love him forever.

Happy Anniversary, Billy Knowles. I love you forever.
Posted by Kathy Knowles at 6:28 AM