There is no manual... 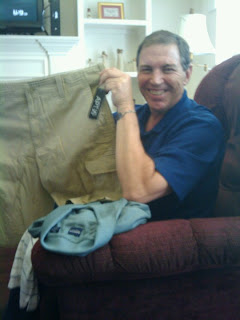 Every holiday is bittersweet these days. We were so happy that Billy was here for Fathers' Day - at home with us. Shelley loves her dad so much, and we had a very nice lunch at our house with my mom and dad, my sister and brother-in-law with their little ones, and my sister-in-law and nephew. It was such a roller coaster weekend with a few ups and more downs but we ended on a positive.

Billy was confused all day Saturday. He kept thinking it was Tuesday or Wednesday, and every time I got up from the chair to do anything, he grabbed his hat and thought we were going somewhere. Every Saturday we go through the "what time is church tonight" question so many times I lose count, and he's leave at 2:30 p.m. (It starts at 5:00 p.m. and takes about 20 minutes to get there). I was busy straightening the house and preparing lunch for the next day, so I was all over the house most of the day. At one point in the afternoon, he came over to me in the kitchen and kissed me on the cheek and said, "You are such a good sister." I looked at him and said, "I'm a pretty good wife, too." At that point, he said, "I'm sure you are," and I knew he thought I was his sister. Apparently he said similar things the previous Thursday because Catherine said he didn't know I was his wife, but she never got the opportunity to explain because Billy is always by my side when I get home.

I blew it off a bit and went on about my day, and then on the way to church, he patted me on the knee and once again told me I was a really good sister. I looked at him and told him that I'm his wife. He got such a funny look on his face, and said, "My WIFE?!" It was clear that he didn't believe me, so I told him I would be his sister that day. By Sunday, he seemed to be thinking I was his wife again. Even though I understand it's the disease, somehow it hurt a little when he thought I was his sister. It just does a little something to my heart, but we go on. When his mom could still talk and converse somewhat, she would introduce Billy as her brother. Relationships get so blurred with damage to the brain.

When we arrived at church, I confused him even more when I told him that Shelley and I needed to leave church early because we were going to see my nephew march in the DCI performance. Billy was going to stay with my son-in-law, and this confused him. It's hard to leave Billy, but it's harder to take him to some events. With the 105 temperature that night, and the fact that Billy goes to the restroom every 1/2 hour, I just couldn't do it. My sister joined Shelley and me, and Billy and my son-in-law stayed at my sister's house with my brother-in-law and their kids. We didn't get finished at the performance until almost 10:00, and my sister called her husband to see if it was okay to stop by the store on our way home. He was very quick to say NO and asked if we could drive at least 100 mph to get home. Apparently Billy was out of sorts. I told Shelley and Leslie about Billy thinking I was his sister and that I had probably handled it wrong. Shelley said, "Mom you can't feel bad about how you handle things. There's no manual that tells you how to deal with your husband thinking you are his sister." That resonated with me. There is no manual on what to do in specific situations when your spouse is slipping away bit by bit. There are some good resources on caretaking, and The 36 Hour Day is excellent in preparing you for many of the situations you encounter, but we are not provided a script on what to do when these things happen. I am thankful that at least Billy knows that I'm family, and that I love him. The day will most likely come that he does not know me, and that will be hard to bear.

He did really well on Sunday when everyone came to the house for lunch. I've noticed that when we are all together, he relaxes a bit. He told me over and over how much he likes my parents, and he's as relaxed as he gets when they are around. It was a good day, and he smiled so big when Shelley took his picture.
Posted by Kathy Knowles at 6:49 PM